How much is Steve Garvey Worth?

Steve Garvey net worth: Steve Garvey is a former American professional baseball player and businessman who has a net worth of $5 million. Steve Garvey is probably most famous for his career as a first baseman for the Los Angeles Dodgers from 1969-1982, and with the San Diego Padres from 1983-1987. He was the NL MVP in 1974, a 10-time All-Star, and he holds the National League record for consecutive games played (1,207). Garvey was born on December 22, 1948 in Tampa, Florida and was nicknamed "Mr. Clean" because of the squeaky clean image. Garvey got his start as a bat boy for the Brooklyn Dodgers, New York Yankees and Detroit Tigers from 1956 to 1961. He graduated from Chamberlain High School, then he attended Michigan State University where he played both football and baseball. He is a member of both the Irish American Hall of Fame and the Michigan State University Athletic Hall of Fame. In Lindsay, California the Steve Garvey Junior High School is named after him. Garvey lost his squeaky "Mr. Clean" image in the mid to late 1980's after he had numerous affairs and fathered several children. He started Garvey Communications in 1988 the company is mostly involved in television production including infomercials. He is also the host of Baseball's Greatest Games, and has been recruited to do motivational speaking mainly for corporations. He currently resides in Los Angeles and Palm Desert, California. 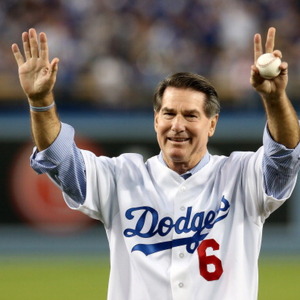