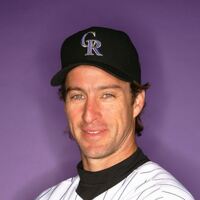 Steve Finley net worth: Steve Finley is an American former professional baseball player who has a net worth of $50 million. He is best known for being a five time Gold Glove Award winner. During his MLB career, Steve earned a little under $70 million in salary.

Steve Finley was born in Union City, Tennessee in March 1965. He was a center fielder who batted and threw left handed. Finley played for all five National League West teams. He made his Major League Baseball debut for the Baltimore Orioles in 1989. Finley played for the Orioles from 1989 to 1990. He played for the Houston Astros from 1991 to 1994, the San Diego Padres from 1995 to 1998, the Arizona Diamondbacks from 1999 to 204, the Los Angeles Dodgers in 2004, the Los Angeles Angels of Anaheim in 2005, the San Francisco Giants in 2006, and the Colorado Rockies in 2007. Steve Finley won the World Series with the Diamondbacks in 2001. He was an MLB All-Star in 1997 and 2000 and won five Gold Glove Awards.

Morgan Stanley: After retiring from baseball, Steve embarked on a career in wealth management and finance, specializing in working with professional athletes. Today he works for Morgan Stanley as a financial adviser in their Global Sports & Entertainment division.