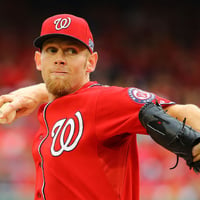 What is Stephen Strasburg's Net Worth, Salary and Career Earnings?

Stephen Strasburg is a professional baseball player who has a net worth of $100 million. In December 2019, Stephen signed the largest contract ever awarded to a pitcher in baseball history (up to that point) – a seven-year $245 million contract that pays an average of $35 million per year, fully guaranteed. He is currently a right-handed pitcher for the Washington Nationals. In his major league debut in 2010, he pitched a franchise-record 14 strikeouts. Strasburg went on to help the Nationals win the 2019 World Series over the Houston Astros and be named the series' MVP.

Stephen Strasburg was born on July 20, 1988 in San Diego, California to dietician Swett and real estate developer Kathleen. As a teen, he went to West Hills High School in Santee, where he played baseball. Although he initially struggled on the team, he began drawing the attention of scouts in his senior year when he threw a 12-strikeout game and allowed only a single hit. Strasburg finished his high school career with three varsity letters and school records in shutouts and ERA.

Although he was recruited by various colleges throughout the country, Strasburg chose to attend his parents' alma mater of San Diego State University. With the San Diego State Aztecs baseball team, he served as a relief pitcher in his freshman year. As a sophomore, Strasburg became a full-time starting pitcher; he went on to post an 8-3 record with a 1.58 ERA and 134 strikeouts. He only improved in his junior year, going 13-1 with a 1.32 ERA and 195 strikeouts. As a result, Strasburg earned the Dick Howser Trophy and the National Pitcher of the Year Award.

In 2009, Strasburg made his professional debut with the Arizona Fall League's Phoenix Desert Dogs. The next season, he was assigned to the Class AA Eastern League's Harrisburg Senators; he finished with a 1.64 ERA and 27 strikeouts. Strasburg was subsequently promoted to the Class AAA International League's Syracuse Chiefs. In his first game with the team, the highest-attended in Syracuse history, he threw six scoreless innings.

Drafted number one overall by the Washington Nationals, Strasburg signed a record-breaking $15.1 million, four-year contract with the team. He made his major league debut in June of 2010, and immediately proved his power by setting a new team strikeout record with 14. Strasburg subsequently set a major league record over his next two games for the most strikeouts across a pitcher's first three starts, with 32. However, due to a right shoulder injury, he was soon placed on the disabled list. After returning to the diamond in August, Strasburg was stymied by another injury, this one requiring Tommy John surgery and a 12-to-18-month recovery period.

Following his rehabilitation, Strasburg had one of his best months yet in April of 2012; in addition to posting a National League-best 34 strikeouts, he also had a second-best 1.13 ERA. In June, he became the first pitcher of the year to record 100 strikeouts. More milestones occurred in 2013, when Strasburg pitched into the 8th inning for the first time in his major league career. He also pitched his first career complete game with a 6-0 shutout over the Phillies. The next season, Strasburg tied with Johnny Cueto to lead the league in strikeouts; additionally, he recorded career-best starts, strikeouts, and innings pitched. 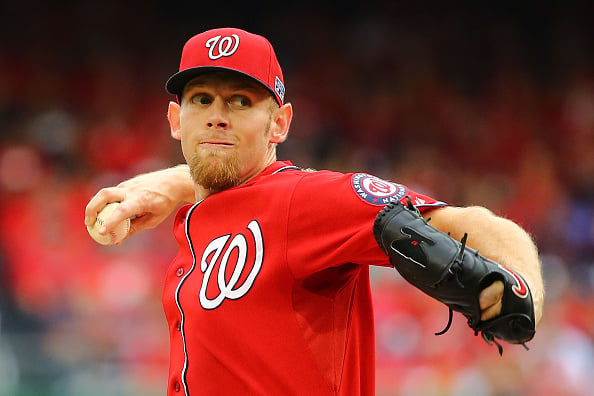 Strasburg had a weak 2015 season, as injuries limited him to his fewest innings since 2011. He bounced back in 2016, when he signed a $175 million, seven-year contract extension with the Nationals. Strasburg went on to post a major milestone when he became the first pitcher in over 100 years to start 12-0. More success followed in 2017, as Strasburg struck out a career-high 15 batters. Later in the year, he set a new franchise record for consecutive innings pitched without any runs, with 34.

The 2019 season was Strasburg's peak. In April, he became the Nationals' career leader in innings pitched; two months later, he pitched an immaculate inning, the fourth in the team's history. Strasburg finished the regular season leading the NL in wins and placing second in strikeouts. The Nationals went on to the NLDS, and then to the World Series, winning in six games over the Houston Astros. For his two wins in two appearances, Strasburg was named the World Series MVP. The subsequent two seasons were far less successful, as a series of injuries caused him to miss most games.

In 2010, Strasburg wed Rachel Lackey, whom he met when they were both attending San Diego State. Together, they have two daughters, and reside in Washington, DC.

In May 2016, Stephen Strasburg signed a 7-year $175 million contract. On December 9, 2019 it was revealed that he had signed a 7-year $245 million extension with the Nationals. By the time his extension is up, he will have earned nearly $350 million in base salaries alone. It is one of the largest contracts in sports history.