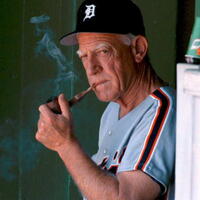 Sparky Anderson net worth: Sparky Anderson was a Major League Baseball manager who had a net worth of $60 million dollars. George Lee Anderson was born in Bridgewater, South Dakota in February 1934 and passed away in November 2010. As a child he was a batboy for the USC Trojans. After high school he signed with the Brooklyn Dodgers in 1953. He played for five seasons in the minor leagues for the Dodgers organization. He was traded to the Philadelphia Phillies in 1958 and he became their starting second basemen. He only played one full season in the majors before playing four more with a Triple-A team. Maple Leafs owner Jack Kent Cookie admired his leadership qualities and hired him in 1964 to manage the Triple-A squad. From 1970 to 1978 Sparky managed the Cincinnati Reds, and he went on to manage the Detroit Tigers from 1979 to 1995. He managed the Reds to two World Series championships in 1975 and 1976, and the Tigers to one in 1984. In 1984 and 1987 Anderson was the American League Manager of the Year. Sparky was the first manager that won a World Series in both the AL and NL. He finished with 2,194 wins, ranking him sixth all time. Sparky has had his #10 retired with the Reds and his #11 retired with the Tigers. In 2000 he was inducted into the Baseball Hall of Fame. He suffered from dementia and passed away on November 4, 2010 at 76 years old.