Shawn Green Net Worth: Shawn Green is an American retired professional baseball player who has a net worth of $45 million. Shawn Green was born in Des Plaines, Illinois in November 1972. Green was a right fielder who batted and threw left handed. He played at Tustin High School and Stanford University. Green was the #16 pick in the 1991 amateur draft by the Toronto Blue Jays. He played for the Blue Jays, Los Angeles Dodgers, Arizona Diamondbacks, and New York Mets. During his career he batted in 100 runs and scored 100 runs four times each. He also hit 40 plus home runs three times and was a two time All-Star in 1999 and 2002. Green won a Gold Glove Award and Silver Slugger Award in 1999. On May 23, 2002 he hit four home runs in one game. He also led the league in extra base hits, doubles, and total bases. He holds records for most home runs in a game, most extra base hits in a game, most runs scored in a game, most total bases in a game, and more. He was one of the best known Jewish baseball players of all time. Green retired in February 2008. He played and coached for Israel in the 2013 World Baseball Classic qualifier. 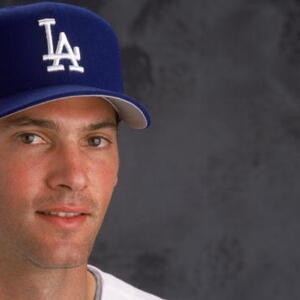