Shane Victorino Net Worth: Shane Victorino is an American professional baseball player who has a net worth of $28 million. Born in 1980 in Wailuku, Hawaii, Shane Victorino was drafted into MLB right out of his Hawaii high school. The Los Angeles Dodgers chose him during the sixth round of the 1999 MLB Draft. He worked his way through the Dodgers' farm system before the San Diego Chargers took him during the 2002 Rule 5 Draft. Victorino made his pro debut on April 2, 2003 with the Padres. He was soon sent back to the Dodgers' farm system before he was taken by the Philadelphia Phillies during the 2004 Rule 5 Draft. He played with the Phillies until 2012 before returning to the Los Angeles Dodgers in 2012. In 2013, Victorino landed with the Boston Red Sox; as of the fall of 2014, he remains in Boston. Victorino is a two-time MLB All-Star (2009, 2011), and won two World Series championships in 2008 with the Phillies and in 2013 with the Red Sox. He earned two National League triple crowns in 2009 and 2011, and won four Rawlings Gold Glove Awards in 2008, 2009, 2010, and 2013. Victorino earned the Branch Rickey Award in 2011 and the Lou Gehrig Memorial Award in 2008. As of the fall of 2014, he is tied with Jim Thome for most career grand slams in the postseason with two. Victorino has two children with his wife, Melissa Smith. 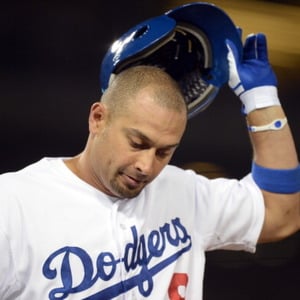