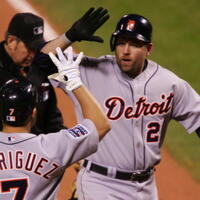 Sean Casey net worth and salary: Sean Casey is a retired MLB first baseman who has a net worth of $15 million. Fondly known as "The Mayor", Sean Casey had a reputation for being one of the most talkative first basemen in the MLB. Interestingly, he was notoriously fond of chatting up opposing players when they got to first base. Rumor has it that he would get offended if a player took off to second base during a conversation.

With a batting average of .461 which led all Division 1 players in 1995, he was drafted in the 2nd round by the Cleveland Indians. His best year in Major League Baseball was in 1999 with the Cincinnati Reds (1998-2005), hitting .332 with 25 HRs and 99 RBIs and 103 runs scored in 151 games. During his tenure in the league Casey's nickname, "the Mayor," stemmed from his approachable demeanor. In a 2007 Sports Illustrated poll, Casey was voted as "the friendliest player in baseball" by fellow players. He earned 46% of the vote. He also holds a tied position with A.J. Prerzynski for the record of most Grounding in Double Plays by a National League Left Hander in a season.

Seen as an active participant in charitable foundations like Make-A-Wish Foundation and Big Brothers, as well as the "Casey's Crew" program, where he provided free high-priced tickets to disadvantaged youths, made him a recurrent topic on sports news almost as frequently as his performance on the field.

He announced his retirement on January 25th, 2009 at 34 years of age with a 12 season's stench in Major League Baseball. An avid Roman Catholic, he has been featured in the film series Champions of Faith and is actively involved with the group Catholic Athletes for Christ. He has a wife, Mandi and has four children. Currently he serves as a baseball analyst for the Major League Baseball Network.