Scott Downs net worth: Scott Downs is an American professional baseball player who has a net worth of $15 million. Scott Downs was born in Louisville, Kentucky in March 1976. Downs is a relief pitcher who bats and throws left handed. Scott was Kentucky's Mr. Baseball while at Pleasure Ridge Park High School.

He was drafted in the 12th round of the 1994 Major League Baseball Draft by the Atlanta Braves but chose to attend the University of Kentucky. After his junior year at Kentucky Downs was drafted by the Chicago Cubs at #94 in the 1997 MLB Draft. He played in the minor leagues before making his MLB debut for the Cubs in 2000. The same year he was traded to the Montreal Expos where he played until being released in 2004. He was then signed by the Toronto Blue Jays and agreed to a one year deal worth $1.025 million. He was re-signed in 2008 to a three year deal worth $10 million. He signed a three year deal worth $15 million with the Los Angeles Angels of Anaheim where he played from 2011 to 2013. In 2013 Downs was traded to the Atlanta Braves. In 2014 he signed a one year deal worth $4 million with the Chicago White Sox but was later released and signed a one year deal with the Kansas City Royals in July 2014. Through the 2014 season Downs has a record of 38 – 40 with 575 strikeouts and 27 saves. 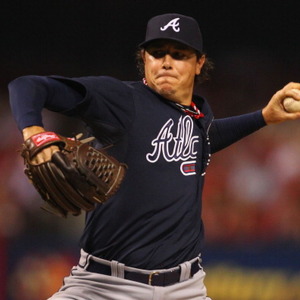