Scott Brosius Net Worth: Scott Brosius is a retired American professional baseball player who has a net worth of $12 million. Born in Hillsboro, Oregon, in 1966, Scott Brosius played college baseball at Linfield College. He made his Major League Baseball debut on August 7, 1991 as a member of the Oakland Athletics.

He played with the A's until 1997 before becoming a member of the New York Yankees. Brosius played in The Bronx from 1998 until 2001, last appearing on October 6, 2001. He earned MLB All-Star honors once in his career in 1988. He is a three-time World Series champion, winning all three as a member of the Yankees in 1998, 1999, and 2000. In 1998, Brosius was named the Most Valuable Player of the 1998 World Series. He won a Gold Glove Award in 1999. Brosius, a right-handed third baseman, finished his pro playing career with a .257 batting average to go along with 141 home runs and 531 runs batted in. After his retirement, Brosius coached at his alma mater for five years. He is a member of the Oregon Sports Hall of Fame and has been part of several activities honoring former Yankees in The Bronx, including throwing out the first pitch ahead of Game 6 of the World Series in 2009. 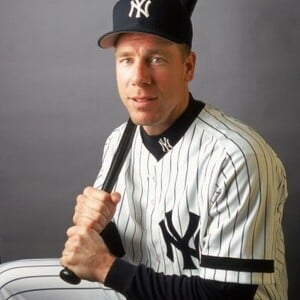