What is Ryne Sandberg's Net Worth, salary and career earnings?

Ryne Sandberg is a retired American professional baseball player and current manager who has a net worth of $16 million. At one point in his career in the early 1990s, Ryne was the highest-paid baseball player in the league.

He was born on September 18, 1959 in Spokane, Washington. Ryne Sandberg made his Major League Baseball debut on September 2, 1981 with the Philadelphia Phillies. He played with the Phillies for one season before joining the Chicago Cubs, where he played from 1982 until 1994 and again from 1996 until 1997. He last appeared with the Cubs on September 28, 1997, more than 16 years after his first MLB game.

The right-handed second baseman finished his pro playing career with a .285 batting average to go along with 2,386 hits, 282 home runs, and more than one thousand runs batted in. Sandberg is a ten-time MLB All-Star (1984-1993) and a nine-time Gold Glove Award winner (1983-1991). He won seven Silver Slugger Awards. Sandberg won the 1990 Home Run Derby. In 1984, he was named the National League Most Valuable Player. The Chicago Cubs later retired his jersey with the number 23.

Sandberg was inducted into the Baseball Hall of Fame in 2005 on his third ballot. He accepted a position managing the Philadelphia Phillies in 2013. He coached the team until June 2015.

Sandberg has his own charitable foundation with his wife, which works to help children battling illnesses. 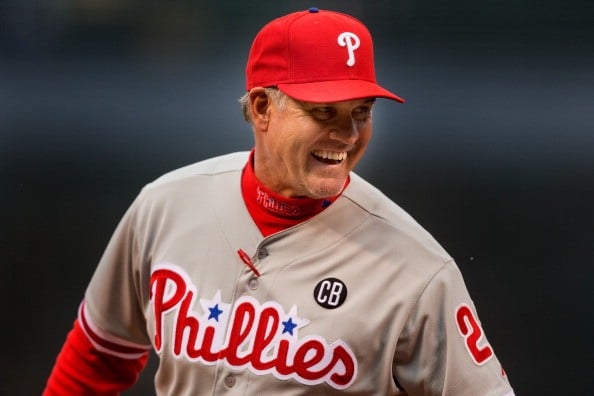 At the peak of his career in 1992, Ryne was the highest-paid player in major league baseball. At that point he earned $7 million per year in salary. That's the same as earning $14 million per year today after adjusting for inflation.

In his career, Ryne earned a total of $25 million in salary.