Ryan Zimmerman Net Worth: Ryan Zimmerman is an American professional baseball player who has a net worth of $60 million. Ryan Zimmerman was born in Washington, North Carolina in September 1984. Zimmerman is a third baseman and left fielder who played for the Virginia Cavaliers. He set school records for most hits in a season in 2004 and 2005.

He won numerous awards while at UVA including being an All-American by Baseball America and the National Collegiate Baseball Writers Association. Ryan played for the USA Baseball National Team and won a gold medal in the FISU II World University Baseball Championship. He was named the 2004 Dick Case Athlete of the Year by USA Baseball. He was drafted by the Washington Nationals as the #4 pick in the 2005 Major League Baseball Draft. Zimmerman played for the Savannah Sand Gnats and Harrisburg Senators. He joined the Nationals and his first full season came in 2006. He has been called the face of the Nationals franchise and is considered a team leader who is known for his walk off hits and clutch hitting. Zimmerman has played for the Nationals for his entire MLB career. In 2009 he was named an All-Star and won a Gold Glove Award. He is a two time Silver Slugger Award winner in 2009 and 2010. He signed a six year $100 million extension in 2012. 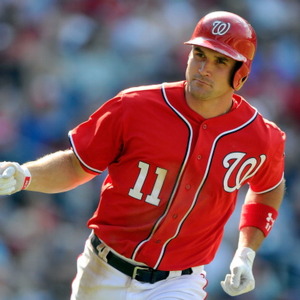