Ryan Vogelsong net worth: Ryan Vogelsong is an American professional baseball player who has a net worth of $7 million. Ryan Vogelsong was born in Charlotte, North Carolina in July 1977. He is a starting pitcher who bats and throws right handed. Vogelsong played baseball, basketball, and soccer at Octorara Area High School in Atglen, Pennsylvania.

He also played Legion baseball and little league baseball. He attended Kutztown University where he set nine school records and was inducted into the school's Athletics Hall of Fame in 2005. Vogelsong was drafted in the 5th round of the 1998 MLB Draft by the San Francisco Giants. He made his MLB debut for the Giants in 2000 and played there until 2001. Vogelsong played for the Pittsburgh Pirates from 2001 to 2006. He next played for the Hanshin Tigers of Japan's Nippon Professional Baseball from 2007 to 2008 and then for the Orix Buffaloes of the NPR in 2009. He came back to Major League Baseball and signed a minor league deal with the Philadelphia Phillies but was released. He then signed with and was released by the Los Angeles Angels of Anaheim. In 2011 Vogelsong came back to the San Francisco Giants. In 2011 he was an MLB All-Star and won the Willie Mac Award. He won a World Series Championship with San Francisco in 2012. 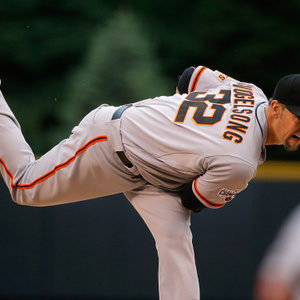