Ryan Klesko Net Worth: Ryan Klesko is a former American professional baseball player who has a net worth of $25 million. Born in Westminster, California, in 1971, Ryan Klesko made his professional Major League Baseball debut with the Atlanta Braves on September 12, 1992. He played with the Braves from 1992 until 1999 before he played for the San Diego Padres from 2000 until 2006 and, finally, the San Francisco Giants in 2007.

He last appeared with the Giants on September 29, 2007. Klesko, a left-handed left fielder and first baseman, amassed a .279 career batting average, hit 278 home runs, and was responsible for 987 runs batted in. Klesko also had a .370 on-base percentage. He hit at least 21 home runs in more than half of his seasons as a pro. Klesko was part of the Braves' 1995 World Series championship. During the run, he became the first player in MLB history to hit a home run in three straight road games during the World Series; Klesko did it to the Cleveland Indians during games three, four and five in 1995. He earned one All-Star honor during 2001. After his one-year free agent contract with the Giants expired at the end of the 2007 season, Klesko officially retired from pro baseball on April 18, 2008. He started working as a broadcast analyst for the Braves and is involved in several charitable efforts. 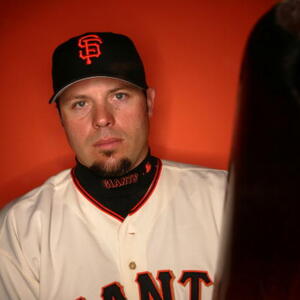