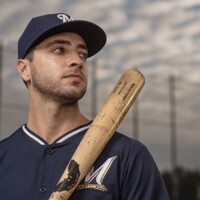 Ryan Braun Net Worth: Ryan Braun is an American baseball player who has a net worth of $8 million. Born Ryan Joseph Braun on November 17, 1983, in Mission Hills, Los Angeles, California, he serves as left fielder and third baseman for the Milwaukee Brewers of Major League Baseball (MLB). Being obsessed with baseball as a kid, Braun first showed his skills as a four-year letterman on the Granada Hills High School baseball team, who was three-year team captain and Most Valuable Player (MVP). Already a top prospect at shortstop, he was undrafted as he told teams that he intended to attend college. Being an excellent student, he chose to attend the University of Miami on an academic scholarship over Stanford and UC Berkeley on baseball scholarships. As a college student, he became a two-time All American at the University of Miami, where he was also named "National Freshman of the Year" by Baseball America in 2003. It was in 2005 that he was selected with the fifth pick in the first round of the MLB Draft that year, and in 2006 he was the team's Minor League Player of the Year. As for his major league debut, it came in 2007 when he was named the NL Rookie of the Year. In all of the subsequent seasons, he was voted to the NL All-Star team and earned the NL Outfielder Silver Slugger Award. Being a five-tool player, Braun is appreciated for his ability to hit for power and average, his baserunning speed, as well as his excellent fielding and arm strength. All of these qualities helped him win the National League (NL) Most Valuable Player (MVP) in 2011. In 2012, he went on to become third among all active ballplayers in career slugging percentage, and first among active left fielders in career fielding percentage. Meanwhile, he was suspected of using performance-enhancing drugs and after MLB's investigation of his case he was suspended as of July 22, 2013, not receiving pay for the remainder of the 2013 season. Away from the troubles on the baseball field, Ryan Braun is spending his free time with his fiancee, Canadian model Larisa Fraser.