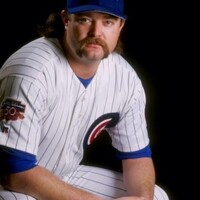 Rod Beck Net Worth: Rod Beck was a former American professional baseball player who had a net worth of $10 million. Born Rodney Roy Beck in 1968 in Burbank, California, Rod Beck was chosen during the 13th round of the 1986 Major League Baseball draft by the Oakland Athletics. Prior to making his big league debut, the A's dealt him to the San Francisco Giants. He made his first MLB appearance on May 6, 1991 with the Giants. Beck, a right-handed pitcher, played with the Giants until 1997 before joining the Chicago Cubs from 1998 until 1999.He later became a member of the Boston Red Sox from 1999 until 2001 and, lastly, the San Diego Padres from 2003 until 2004. Beck's last in-game appearance came with the Padres on August 14, 2004. He finished his pro playing career with a 38-45 win-loss record and an earned run average of 3.30. Beck struck out 644 batters and recorded 286 saves. He appeared in more than 700 MLB games. Beck was a three-time MLB All-Star (1993, 1994, 1997) and won National League Rolaids Relief Man of the Year honors after the 1994 season. Beck died at his Phoenix, Arizona home on June 23, 2007. Though a public cause of death was never released, Beck's ex-wife alleged the death was related to drugs after cocaine was found at the home. Beck was 38 years old.