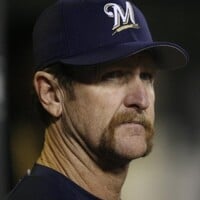 Robin Yount Net Worth: Robin Yount is a former American professional baseball player who has a net worth of $9 million. Robin Yount was born in Danville, Illinois in 1955, and was drafted third overall during the 1973 Major League Baseball draft. He made his pro debut on April 5, 1974 with the Milwaukee Brewers. Yount went on to play for 20 years and spent every game of his career with the Brewers. He last appeared on October 3, 1993. He finished his pro playing career with a .285 batting average to go along with 3,142 hits, 251 home runs and more than 1,400 runs batted in. Yount is a three-time MLB All-Star (1980, 1982, 1983) and a two-time American League Most Valuable Player (1982, 1989). He won the Gold Glove Award in 1982 and three Silver Slugger Awards (1980, 1982, 1989). The Brewers retired his jersey number, 19. He was inducted into the Baseball Hall of Fame in 1999 on the first ballot. After his retirement, Yount coached with the Arizona Diamondbacks before returning to the Brewers in a similar role. He has been married to his high school sweetheart, Michele, since 1979. He is an avid fan of motorcycling and racing cars. He is a minority owner of a college summer baseball league team that plays in Wisconsin.