On January 5, 2011, Alomar was elected to the Baseball Hall of Fame, in his second year of eligibility. He became the first Hall of Fame member to be inducted as a Toronto Blue Jays player. Currently, Alomar serves as a Special Advisor to the Blue Jays. Alomar was a switch-hitter and threw right-handed. He is the son of Sandy Alomar, Sr., a former All-Star second baseman with a 15-year MLB career. His older brother, Sandy Alomar, Jr., was a Major League All-Star catcher and is now the first base coach for the Cleveland Indians. At the age of 17, Roberto Alomar signed with the San Diego Padres and joined the team's Class-A affiliate in Charleston and was an All-Star for the first time in 1990, as a reserve player for the National League. On December 5, 1990, Alomar and Joe Carter were traded to the Toronto Blue Jays in exchange for Fred McGriff and Tony Fernández. On July 19, 2011, the Toronto Blue Jays announced they would retire Alomar's number 12 soon after his official induction into the Baseball Hall of Fame. Roberto Alomar is the first player in Blue Jays franchise history to have this honor, which took place on July 31, 2011. He went on to play for the Baltimore Orioles (1996-98), the Cleveland Indians (1999-2001), New York Mets (2002-03), the Chicago White Sox (2003), Arizona Diamondbacks (2004) and a second stint with the Chicago White Sox (2004). 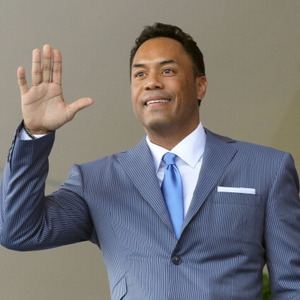