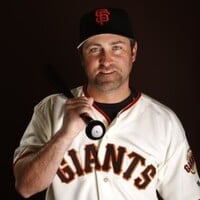 Rich Aurilia Net Worth: Rich Aurilia is a former American professional baseball player who has a net worth of $13 million. Rich Aurilia was born in Brooklyn, New York, in 1971. He played college baseball for the St. John's University Red Storm where he earned All Big East honors in 1992. The Texas Rangers drafted him during the 24th round of the 1992 Major League Baseball Draft. After working his way through the organization's farm system, Aurilia was traded to the San Francisco Giants a year before making his MLB debut on September 6, 1995 with the Giants. He went on to play with the Giants until 2003. Aurilia later played with the Seattle Mariners in 2004, the San Diego Padres in 2004, the Cincinnati Reds from 2005 until 2006, and the San Francisco Giants a second time from 2007 until 2009. Aurilia, a right-handed shortstop, earned MLB All-Star honors during the 2001 season, the same year he won the only Silver Slugger Award of his career. Aurilia last appeared on October 4, 2009 as a member of the Giants. He finished his pro playing days with a .275 batting average to go along with 186 home runs and more than 750 runs batted in. Aurilia and his wife, Raquel, appeared as jurors in an episode of the soap opera "General Hospital". He and his wife are very active with the Make-A-Wish Foundation. Aurilia has two children: sons Chaz and Gavin, born in 2001 and 2003.