Ray Lankford Net Worth and salary: Ray Lankford is an American retired professional baseball player who has a net worth of $16 million. During his career, Ray earned around $48 million in salary.

Ray Lankford was born in Los Angeles, California in June 1967. He was a center fielder and left fielder who batted and threw left handed. Ray's uncle Carl Nichols was a professional baseball player. Lankford made his Major League Baseball debut for the St. Louis Cardinals in August 1990. He played for the Cardinals from 1990 until 2001. Lankford joined the San Diego Padres from 2001 to 2002 before finishing his career back with the Cardinals in 2004. He was selected as an MLB All-Star in 1997. During his MLB career Lankford had 238 home runs, 874 runs batted in, and a batting average of .272. He finished in the Top 10 for the Cardinals in home runs, stolen bases, runs scored, bases on balls, and runs batted in. He is the only Cardinal to have had 200 home runs and 200 stolen bases and hit the most home runs at Busch Stadium. 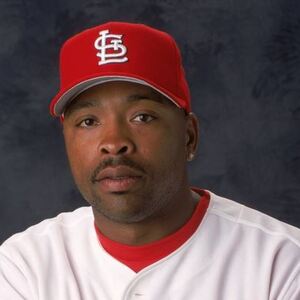