Raul Ibanez Net Worth: Raul Ibanez is an American professional baseball player who has a net worth of $27 million. Raul Ibanez was born in New York City, New York, in 1972, two years after his parents left Cuba for the United States. Ibanez played college baseball at Miami-Dade Community College.

The Seattle Mariners drafted him during the 37th round of the 1992 Major League Baseball Draft. He made his way through the team's farm system before making his pro debut on August 1, 1996 for the Mariners. He played with the Mariners until 2000 before joining the Kansas City Royals from 2001 until 2003, the Mariners a second time from 2004 until 2008, the Philadelphia Phillies from 2009 until 2011, the Mariners a third time in 2013, the Los Angeles Angels of Anaheim in 2014, and the Kansas City Royals in 2014. As of the fall of 2014, Ibanez remains with the Royals. He earned his first and, to date, only MLB All-Star honor in 2009. Through the 2014 season, Ibanez has a .272 career batting average, 2,034 hits, 305 home runs, and 1,207 runs batted in. His colleagues across MLB voted him as the second nicest person to play in Major League Baseball. Ibanez, an outfielder and designated hitter, has five children with his wife, Teryvette. 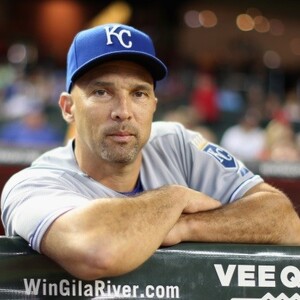