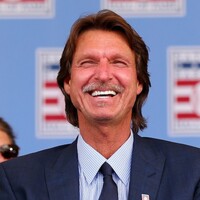 Randy Johnson net worth and salary: Randy Johnson is a retired American professional baseball player who has a net worth of $95 million. During his career, Randy Johnson earned over $175 million in salary alone. He also earned millions more from endorsements. The former Major League Baseball player, also known as the 'Big Unit', was one of the most prominent pitchers in American Baseball history. After 22 years in the big leagues, Johnson retired. Californian-born Randy Johnson was already a baseball and basketball star by the time he entered high school. While attending the University of Southern California his pitching techniques didn't go unnoticed by coach Rod Dedeaux. Johnson's, road to baseball stardom started when he was acquired by Montreal Expos in the 1985 Major League Baseball draft. Three years later, he made his MLB debut. The 6ft 10 player became widely known as the 'most feared pitcher in baseball' because of his dominant pitching technique and his intimidating stature.

In 1989, Johnson was traded to Seattle Mariners. A year after joining the team, Johnson became the first-ever left handed pitcher to strike out baseball Legend Wade Boggs three times in a single game. After his outstanding performance in the 1994 season, Johnson won the American League Cy Young Award.

In the late nineties, Johnson signed a four-year deal worth $52.4 million with the Arizona Diamondbacks. While with Diamondbacks, Johnson won the NL Cy Young Award each of those four season.s Furthermore Johnson, along with fellow pitcher Curt Schilling, led the Diamondbacks to its first World Series and victory in 2001. The two pitchers were hailed as 'Sportsmen of the Year' by Sports Illustrated.

Johnson switched to the New York Yankees in 2005. However his performance with the team was inconsistent, due to a back injury. He subsequently missed the last part of the 2006 season. Johnson returned to the Diamondbacks in 2007. He was hardly seen on the pitching mound due to another back injury which resulted in surgery. Johnson made his season debut in 2008 against San Francisco Giants. In this game, he surpassed Roger Clemons to become second on the all time strike out leaders list. The Giants offered Johnson a one-year deal, worth $8 million plus $2.5 million award bonuses the following season. At the time of joining the Giants, Johnson was second oldest player in Major League Baseball. In January 2010, Johnson announced his retirement from the game.