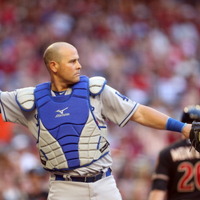 Ramon Hernandez Net Worth: Ramon Hernandez is a retired Venezuelan professional baseball player who has a net worth of $25 million. Ramon Hernandez was born in Caracas, Venezuela, in 1976. He made his Major League Baseball debut on June 29, 1999 as a member of the Oakland Athletics. Hernandez, a right-handed catcher, went on to play for the A's through the 2003 season. He joined the San Diego Padres beginning in 2004 and played with the team for two seasons until he landed with the Baltimore Orioles from 2006 until 2008. Hernandez later played with the Cincinnati Reds from 2009 until 2011, the Colorado Rockies in 2012, and the Los Angeles Dodgers in 2013. Hernandez has earned MLB All Star honors once in his career during the 2003 season. He last played on June 12, 2013 for the Dodgers. Following his release from the Dodgers, Hernandez landed a contract with the Toronto Blue Jays in the summer of 2013 and was assigned to the organization's minor league team. About ten days later he was released. In early 2014, he landed a minor league deal with the Kansas City Royals, but decided to opt out and enter free agency. Hernandez finished his pro playing career with a .263 batting average. He amassed more than 1,300 hits, 169 home runs, and 757 runs batted in.