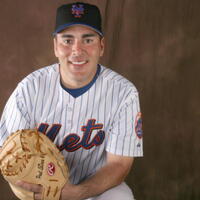 Paul Lo Duca Net Worth: Paul Lo Duca is a television personality and formerly a Major League Baseball catcher who has a net worth of $30 million. Lo Duca previously played professionally for various teams starting with the Los Angeles Dodgers from 1998 to 2004, the Florida Marlins from 2004 to 2005, and again in 2008, the New York Mets from 2006 to 2007, and finally the Washington Nationals in 2008.
Paul was born on April 12, 1972 in Brooklyn, New York but mostly grew up in Glendale, Arizona. He became a walk-on to the baseball team at Arizona's Glendale Community College when he did not feature in any drafts after graduating from Apollo High School. He went on to hit .449 and .461 during his initial 2 years playing for the community college, after which he transferred to Arizona State University. 1993 was the only year Lo Duca starred for the ASU baseball team, and during which he was named the university's Sporting News Player of the Year, on his way to setting new school baseball records scoring 129 hits with a .446 batting average. In that same remarkable year, he also earned a finalist mention for the university's Golden Spikes Award, while his amazing 37-game hitting streak is currently the second longest in ASU's history.
Lo Duca spent several years playing his trade in the minor leagues despite his success in college. His breakthrough finally came in 2001, when he signed on with the Los Angeles Dodgers, aged 29. He is currently divorced and has a daughter with Bella Lucia, his estranged wife who's also a former Playboy model. Upon his retirement, Lo Duca became a horse race analyst working for the TVG Network.