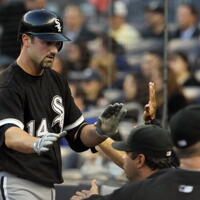 Paul Konerko net worth: Paul Konerko is an American professional baseball player who has a net worth of $60 million dollars. Paul Konerko was born in Providence, Rhode Island and distinguished himself as a player to watch while in high school. He set multiple school records and was ranked the #1 catcher in the nation his senior year. The Los Angeles Dodgers drafted him in 1994, and for the next few years, he played for the both the Triple-A Albuquerque Dukes and the Dodgers. He then played one season for the Cincinnati Reds, before signing with the Chicago White Sox. He hit his stride with the White Sox. Since signing with the team, he has been named a six-time All-Star, AL Comeback Player of the Year in 2004, ALCS MVP in 2005, and a World Series Champion. He also served as Captain of the White Sox from 2006 to 2013.