Pat Burrell net worth and salary: Pat Burrell is a former professional baseball player from 2000-2011 who has a net worth of $30 million. Pat Burrell was born on October 10, 1978 in Eureka Springs, Arkansas. Nicknamed "Pat the Bat" and "Met Killer" he stands 6 feet 4 inches tall and weights 235 pounds. He attended the University of Miami where he won a Golden Spikes Award in 1998 right before becoming the first overall draft pick by the Phillies.

In 2000, after two years in the minors, Burrell was called up by the Phillies, which started his major league career. Pat Burrell was drafted by the Phillies in 1998 as a third baseman out of the University of Miami, but spent the bulk of his career as a left fielder, both throwing and batting as a right-hander. The Phillies selected Burrell with the #1 overall pick in the draft. He played nine seasons with the Phillies and helped the Phillies to a World Series Championship in 2008. He finished fourth in the 2000 Rookie of the Year vote tally, and received MVP votes in 2002 and 2005. After the 2008 Championship season with the Phillies, Burrell became a free agent and signed a two-year deal with the Tampa Bay Rays. In 2010 he became a free agent, and soon signed with the San Francisco Giants. In 2010, Burrell scored another World Series ring but this time did not have a hit in the series. Pat Burrell retired in 2011 due to a chronic foot injury while playing for the San Francisco Giants. He filed as a free agent in October 2011, and eventually signed a one-day minor league contract with the Philadelphia Phillies in order to officially retire with the organization. He retired during the Boston Red Sox series at Citizens Bank Park and was honored on the field where he threw out the ceremonial first pitch. Pat Burrell was previously married to Michelle Burrell but has been divorced since 2009. He has an English Bulldog named Elvis who was featured in the Phillies 2008 World Series Parade.

He is currently a special assignment scout for the Giants and an assistant to General Manager, Brian Sabean. 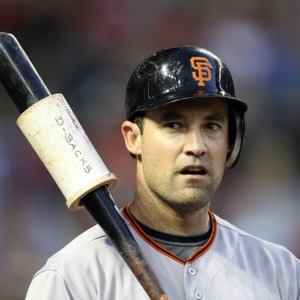