After playing in the minor leagues Sandoval made his MLB debut for the Giants in 2008 and has played there his entire professional career. With the Giants Sandoval won the World Series Championship in 2010 and 2012. In 2012 he was named the World Series MVP and also won the Babe Ruth Award. He was a MLB All-Star in 2011 and 2012. Sandoval hit for the cycle in September 2011 against the Colorado Rockies. He holds the Major League Baseball record for hitting three consecutive home runs in his first three at-bats of Game 1 of the 2012 World Series. Pablo is also one of six players to have had three home run games in both the regular season and postseason. 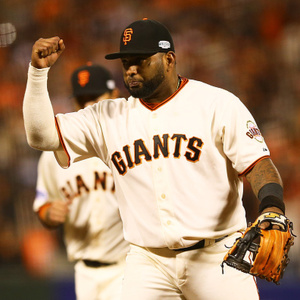