Octavio Dotel net worth: Octavio Dotel is a Dominican former professional baseball player who has a net worth of $16 million. Octavio Dotel was born in Santo Domingo, Dominican Republic in November 1973. He was a pitcher who batted and threw right handed. Dotel was signed as an amateur free agent by the New York Mets in 1993.

He played in the minor leagues before making his Major League Baseball debut for the Mets in 1999. Dotel was a journeyman pitcher who played for the Mets in 1999 and then for the Houston Astros from 2000 to 2004. He played for the Oakland Athletics from 2004 to 2005, the New York Yankees in 2006, and the Kansas City Royals and Atlanta Braves in 2007. Dotel played for the Chicago White Sox from 2008 to 2009, the Pittsburgh Pirates in 2010, the Los Angeles Dodgers and Colorado Rockies in 2010, the Toronto Blue Jays and St. Louis Cardinals in 2011, and the Detroit Tigers from 2012 to 2013. During his career Dotel won a World Series championship with the Cardinals in 2011. He also pitched a combined no-hitter for the Astros in 2003. He represented the Dominican Republic in international competition and won the World Baseball Classic in 2013. 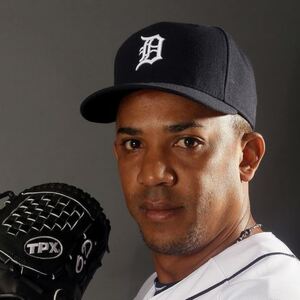