Norichika Aoki Net Worth: Norichika Aoki is a Japanese professional baseball player who has a net worth of $2 million. Norichika Aoki was born in Hyuga, Miyazaki, Japan in January 1982. Aoki is a right fielder who bats left and throws right handed. In junior high and high school Aoki was a pitcher but transitioned to outfield while attending Waseda University.

Aoki was drafted in the 4th round of the 2003 Nippon Professional Baseball League by the Yakult Swallows. During his time with the Yakult Swallows Aoki was a seven time NPB All-Star from 2005 to 2011. He was also awarded the Best Nine Award from 2005 to 2011 and was a six time Golden Glove Award winner from 2006 to 2011. Aoki was a three time CL batting champion in 2005, 2007, and 2010. He was named CL Rookie of the Year in 2005 and was the CL stolen base leader in 2006. Aoki was also a two time NPB All-Star Game MVP in 2006 and 2009. Representing Japan he won Gold medals at the 2006 and 2009 World Baseball Classics and was named to the All-Tournament Team in 2009. In 2012 the Milwaukee Brewers signed Aoki to a two year contract. In December 2013 he was traded to the Kansas City Royals. He is one of just four players to have 200 or more hits in a single season in Japanese professional baseball. Aoki also competed for Japan in the 2008 Beijing Olympics. 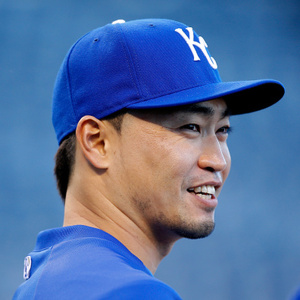