Markakis played college baseball at Young Harris and earned Georgia Junior College Player of the Year honors twice. The Cincinnati Reds drafted him in 2001 and later 2002 before the Orioles chose him with the seventh overall pick during the 2003 MLB Draft. Markakis finally decided to play professionally and joined the Orioles' farm system before making his major league debut on April 3, 2006, against the Tampa Bay Devil Rays. He's been with the team ever since, winning a Gold Glove in 2011. Markakis also lead the American League in outfield assists in 2008 and sacrifice flies in 2009. He had the best fielding percentage among outfields in MLB in 2011. As of early September, Markakis' career stats include a .291 batting average, 1,531 hits, 139 home runs, 652 runs batted in, 315 doubles, and 736 runs scored. He is active in several charities, including the Right Side Foundation and the Prostate Cancer Foundation. He has three children with his wife, Christina. 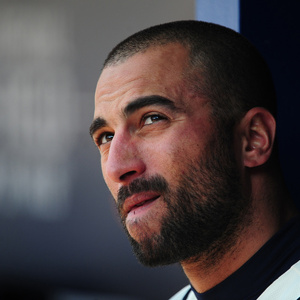