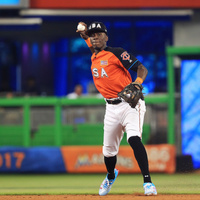 Nick Gordon Net Worth: Nick Gordon is an American professional baseball player who has a net worth of $2 million. Nick Gordon was born in Orlando, Florida in October 1995. He is a shortstop who bats left and throws right. Nick played at Olympia High School in Orlando. He was named Florida Gatorade Baseball Player of the Year as a junior in 2013. Gordon had an average of .505 and had two home runs and 30 runs batted in. As a pitcher he also went 5-1 and had a 0.78 earned run averaged including 44 strikeouts and five saves. As a top prospect he was drafted #5 by the Minnesota Twins in the 2014 Major League Baseball Draft. In June 2014 he signed with the Twins for a signing bonus of $3,851,000. Nick is the son of Major League Baseball player Tom Gordon and the brother of the Los Angeles Dodgers baseball player Dee Gordon. He currently plays as a rookie for the Appalachian League Elizabethton Twins.