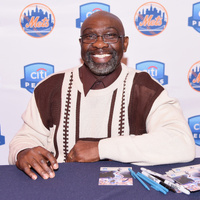 Mookie Wilson net worth: Mookie Wilson is an American former professional baseball player who has a net worth of $3 million. Mookie Wilson was born in Bamberg, South Carolina in February 1956. He was a center fielder who was a switch hitter and threw right handed. Wilson made his Major League Baseball debut for the New York Mets in 1980. He played for the Mets from 1980 to 1989 and the Toronto Blue Jays from 1989 to 1991. During his MLB career he had 67 home runs, 438 runs batted in, 327 stolen bases, an da batting average of .274. Mookie Wilson won the World Series with New York in 1986 and was elected to the New York Mets Hall of Fame. He hit a ground ball in game six of the World Series which rolled through Bill Buckner's legs. After retiring he became the Mets first base coach from 1996 to 2002 and then he managed the Rookie League Kingsport Mets from 2003 to 2004 and the Brooklyn Cycles in 2005. He has also worked in the Mets front office.