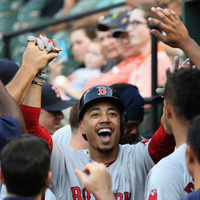 What is Mookie Betts' Net Worth and Salary?

Mookie Betts is an American professional baseball player who has a net worth of $50 million. After joining Major League Baseball in 2015, he has played for the Boston Red Sox and Los Angeles Dodgers. In July 2020 he signed what was then the second-largest baseball contract in MLB history, a $390 million 12-year deal. The deal came with a $65 million signing bonus.

On July 22, 2020, with one year left on his Dodger deal, Mookie signed a 12-year contract extension with the team. The $390 million deal came with a mind-blowing $65 million signing bonus. When combined with the $27 million he was still owed from his original two-year deal, Mookie's total contract value is close to $420 million. He will make $3 million from his contract… every 16 games. After adjusting for inflation, that's more than fellow Dodger Jackie Robinson made in his ENTIRE CAREER. Mookie has reportedly kept his Tennessee residence throughout his career which means he will likely pay no state income taxes on his earnings. As a result he'll likely save north of $40 million over the lifetime of the contract.

Mookie was born Markus Lynn Betts on October 7, 1992 in Smyrna, Tennessee. His parents chose his name in part to form the initials of MLB, matching those of Major League Baseball. His mother was his first Little League Baseball coach and he is also related to Terry Shumpert, a form MLB player who is related to Betts on his mother's side.

He attended John Overton High School in Nashville, Tennessee where he played baseball. During his junior year, Betts batted .548 with 24 steals. He signed a letter of commitment to attend the University of Tennessee on a baseball scholarship after having also been recruited by a number of prominent baseball schools. In addition to excelling in baseball, Betts was also a talented basketball player and bowler. He competed professional in bowling throughout the mid-2010s and has officially bowled three perfect games during competitions.

In 2011, the year Betts was set to begin playing baseball at the University of Tennessee, Betts was selected by the Boston Red Sox in the 5th round of the Major League Baseball draft. He then rescinded his commitment to the University of Tennessee and signed a $750,000 contract with the Red Sox. He played one game in 2011 for the GCL Red Sox of the rookie Gulf Coast League. In 2012, he played a short season with the Lowell Spinners of the New York-Penn League, usually playing either shortstop or second base.

In 2013, Betts started the season with the Greenville Drive of the Law A South Atlantic League. He had a 19-game hitting streak and was selected to the South Atlantic League All-Star Game. In July of that year, Betts was promoted to the Salem Red Sox of the High A Carolina League. He had an impressive conclusion to the season and was named Offensive Player of the Year and Breakout Player of the year in the Boson minor league system.

Betts opened the 2014 season with the Portland Sea Dogs of the Double-A Eastern League and was then promoted to the Pawtucket Red Sox of the Triple-A International League in June. Since mid-2014, Betts has been playing outfield in addition to second base.

In June of 2014, Betts was promoted to the Red Sox in the Major League. He made is debut with the team in late June and recorded his first major league career hit against the Yankees and hit his first home run in July. In August, he hit his first career grand slam against the Rays to lead to a Red Sox victory. At he age of 21, Betts became the youngest Sox player to hit a grand slam in 49 years. He had spent the majority of the season in the outfield but began playing in the second base position following an injury to the regular second baseman. During the season, he played games with the Red Sox as well as their affiliated AA and AAA teams. 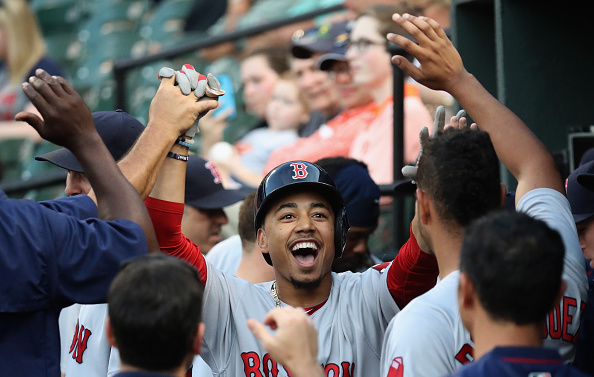 On Opening Day for the 2015 Red Sox season, Betts hit a home run in his second at bat, becoming the third youngest player to hit a home run on Opening Day. This kicked off a successful season for Betts, who arguably had the most exciting performance of his career during a game in April when he robbed an opposing player of a home run, stole two bases during a single play, and hit a home run all during the first three innings.

Mookie Betts was selected to the 2016 MLB All-Star Game for the first time in his career. He was named AL Player of the Month for July in 2016. The Red Sox had a successful 2016 season and clinched the AL East Division, though they ultimately lost to the Cleveland Indians in the 2016 ALDS. The 2017 season was also successful for Betts, as he maintained 129 consecutive plate appearances without a strikeout. The following season, in 2018, Betts was named the American League MVP after leading the Red Sox to a World Series win. The accolade made him the only player in American League history to win the World Series, a Gold Glove award, a Silver Slugger award, and the AL MVP in the same season.

Betts spent his last season at Boston in 2019 before the team traded him to the Los Angeles Dodgers in early 2020. He performed well with the Dodgers and was awarded his fifth consecutive Gold Glove and his fourth Silver Slugger award. He was selected to the National League All-Star Team in 2021 but did not play having injured his back and shoulder. He did play again in 2021 and also in 2022. In July of 2022, Betts hit his 200th career home run.

Mookie Betts and his longtime girlfriend, Brianna Hammonds, began dating while the two were still in high school. They welcomed their first child, a daughter, in November of 2018. In January of 2021, the couple announced their engagement. They were married in December of 2021 in Palos Verdes, California. They have a home in Franklin, Tennessee as well as in Encino, Los Angeles. In 2021, Betts announced that he had become a vegan.

Betts is known for wearing necklaces while playing baseball. He was gifted one by a 13-year-old fan during spring training in 2018. He continued wearing the necklace over the next few seasons and is now rarely seen without it.

In November 2020 Mookie paid $7.6 million for a home in Encino, California. Football coach Chip Kelly and his wife Jill Cohen were the sellers, having paid $7 million just two years prior.