Mike Trout Net Worth, contracts and salary: Mike Trout is an American professional baseball player who has a net worth of $120 million. Mike Trout was born in Vineland, New Jersey in August 1991. Trout is an outfielder who bats and throws right handed. His father Jeff played in college and was drafted by the Minnesota Twins in 1983. Mike played in Little League and at Millville Senior High School. As a pitcher he threw a no-hitter before switching to outfield. His 18 home runs were a New Jersey high school record. He committed to East Carolina University before being drafted #25 by the Los Angles Angels of Anaheim in the 2009 MLB Draft. He made his debut for the Angels in July 2011 and has played for them for his entire career. In his first season Trout was named American League Rookie of the Year and was the AL stolen base champion. In 2012 and 2013 he won Silver Slugger Awards and he has been an MLB All-Star from 2012 to 2014. In 2012 he finished second to Miguel Cabrera for AL MVP and led the league in runs scored, stolen bases, and wins above replacement. In 2013 he again finished 2nd in AL MVP voting and led the league in WAR. He has been featured in ads for Subway and became a partner and investor for sports drink BodyArmor SuperDrink. In 2014 Trout signed a six year contract extension with the Angels worth $144.5 million. Between June 2017 and June 2018, Mike Trout made $27 million from salary and endorsements.

Mike Trout 2019 Angels Contract: In March 2019 it was reported that Mike Trout was nearing completion on a 12-year $430 million contract with the Anaheim Angels. If this contract is finalized, it will be the largest contract in sports history. Mike will earn the most annual average money, $35.8 million, of anyone in baseball history. By the time the deal is up, Mike will have earned more than $500 million in salary alone during his career.

Outside of his baseball salary, Mike has been known to earn $10-20 million per year from endorsements. 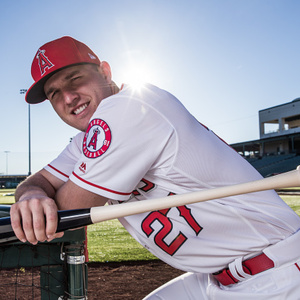