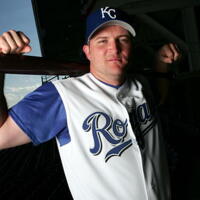 Mike Sweeney Net Worth: Mike Sweeney is a retired American professional baseball player who has a net worth of $35 million. Born in Orange, California, in 1973, Mike Sweeney was drafted during the tenth round of the 1991 MLB Draft by the Kansas City Royals. Sweeney was chosen directly out of high school. He played his way through the minors before making his MLB debut with the Royals on September 14, 1995. Sweeney played with the Royals until 2007 before joining the Oakland Athletics in 2008, the Seattle Mariners from 2009 until 2010, and, briefly, the Philadelphia Phillies in 2010. He captained the Royals during his last few years with his original franchise from 2003 until 2007. Sweeney was a five-time All-Star in 2000, 2001, 2002, 2003, and 2005. He finished his career with a .297 batting average, 215 home runs, and 909 runs batted in. Sweeney is very active in his community, working to improve poorer parts of Kansas City. He is an outspoken Catholic and has been involved in several efforts to curb embryonic stem cell research. He has been married to Shara Nettles, daughter of ex-MLB player Jim Nettles, since 2002. They have three children together: daughter McKara and sons Michael and Donovan.