Mike Scioscia Net Worth and salary: Mike Scioscia is an American professional baseball manager and former player who has a net worth of $25 million. Mike Scioscia was born in Upper Darby, Pennsylvania in November 1958. He was drafted #19 by the Los Angeles Dodgers in the 1976 MLB draft and debuted for L.A.

in 1980. Scioscia was a catcher who batted left and threw right handed. He played for the Dodgers for his entire career from 1980 to 1992. During this time he was a two time All-Star and three time World Series champion. After retiring he spent many years as a coach in the Dodgers' organization. After the 1999 season he was hired as the field manager of the Anaheim Angels / Los Angeles Angels of Anaheim. He became the team's manager in 2000 and is the longest-tenured manager in Major League Baseball. He led the Angels to their only World Series championship in 2002. Scioscia is the Angels' all-time managerial leader in games managed, wins, and division titles. He won the American League Manager of the Year Award in both 2002 and 2009. In 2011 he became the 56th manager to win 1,000 or more games and the 23rd to have 1,000 or more wins with a single team. He is a celebrity endorser of Howard's Appliance & Big Screen Superstore chain in Southern California. In 2018, Mike announced he would be retiring after nearly two decades with the Angels. 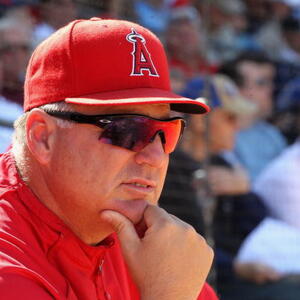