What is Mike Piazza's Net Worth?

Mike Piazza is a former professional baseball catcher who has a net worth of $70 million. Mike Piazza played for 16 seasons in the MLB from 1992 to 2007. Most notably, he played for the New York Mets and Los Angeles Dodgers, and also briefly played for the San Diego Padres, Florida Marlins, and Oakland Athletics. Regarded as one of the greatest offensive catchers in history, Piazza was elected to the Baseball Hall of Fame in 2016.

During his career, Mike Piazza earned $120 million in salary alone. He earned tens of millions more from endorsements. His highest single-season salary was $16 million which Mike earned in 2005 from the Mets. That's the same as earning around $22 million in today's dollars after adjusting for inflation.

Mike Piazza was born on September 4, 1968 in Norristown, Pennsylvania to Veronica and Vince. He has four brothers named Vince Jr., Dan, Tony, and Tom. The kids grew up in Phoenixville, attending Phoenixville Area High School. Piazza had his first brush with professional baseball when the Los Angeles Dodgers – which was managed by his father's friend Tommy Lasorda – visited Philadelphia, and he served as a bat boy in the dugout. At the age of 12, Piazza received personal instruction in his backyard batting cage from Hall of Famer Ted Williams. He continued to practice every night with his father. After graduating from high school in 1986, Piazza moved to Florida to attend the University of Miami; however, receiving zero playing time with the Hurricanes baseball team, he wound up transferring to Miami-Dade Community College.

In the 1988 MLB amateur draft, Piazza was selected by the Los Angeles Dodgers after his father asked Lasorda to pick him as a favor. Lasorda subsequently helped Piazza get into a special training camp in the Dominican Republic, where he intended to have him improve his skills to reach the major leagues. Piazza went on to make his MLB debut with the Dodgers in 1992. Appearing in just 21 games that season, he recorded a batting average of .232. He was far more successful the next year, appearing in 149 games, batting .318, and scoring 35 home runs. As a result, Piazza won the NL Rookie of the Year Award, and was selected to the MLB All-Star Game for his first of 10 consecutive appearances. His best season with the Dodgers came in 1997, when he batted .362, made 40 homers, and recorded 124 RBI.

Piazza was traded to the Florida Marlins in May of 1998 after having played seven seasons with the Dodgers. However, he appeared in only five games with the team before he was traded to the New York Mets. Piazza had some of his best seasons with New York, helping the team make it to two consecutive playoff appearances in 1999 and 2000. He helped lead the Mets to a National League pennant and, ultimately, to the World Series in 2000. One of the most notable moments of the Series occurred in Game 2, when Yankees pitcher Roger Clemens threw a pitch that broke Piazza's bat and sent shrapnel directly toward the mound. Clemens initially thought the ball had come back to him, and upon realizing it hadn't, threw the shrapnel across the first base line toward the Yankees' dugout. Clemens and Piazza exchanged glares and harsh words, but stopped short of an altercation. Ultimately, the Yankees ended up winning the championship in five games.

With the Mets, Piazza participated in the first professional baseball game in New York following the 9/11 attacks, on September 21. In the eighth inning, he made a game-winning home run that represented a moment of therapy and hope for many people in the country. The jersey Piazza wore during that game was purchased many years later for $365,000, the largest amount ever shelled out for a modern-day jersey. Among Piazza's other accomplishments with the Mets, he caught two no-hitters in games against the Dodgers. In 2004, he surpassed Carlton Fisk for the most homers by a catcher, with 352. 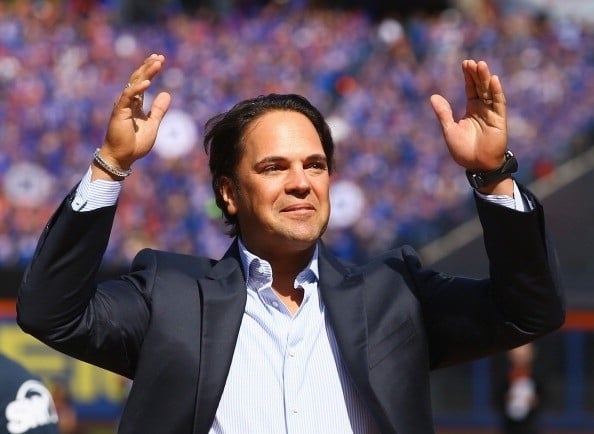 Following his final season with the Mets in 2005, Piazza signed a one-year contract with the San Diego Padres. He had a great season in 2006, batting .283 and scoring 22 homers to help the Padres to a division title. In July, he notched his 2,000th career hit in the MLB. For the next season, Piazza signed as a free agent with the Oakland Athletics. Early in the season, he hit his 427th major league homer, which would ultimately be his last.

Upon not being signed to any MLB team in 2008, Piazza announced his retirement. He returned to Shea Stadium in September, and received the final pitch in the history of the stadium.

Beyond baseball, Piazza had a majority ownership stake of the Italian soccer club A.C. Reggiana. However, following two seasons and the controversial loss of player Robur Siena, Piazza put the team up for sale. Ultimately, mounting costs and a lack of buyers forced the club to fold in 2018.

In 2005, Piazza wed Playboy Playmate Alicia Rickter. Together, they have three children: daughters Nicoletta and Paulina and son Marco.

A lover of heavy metal music, Piazza is featured on Black Label Society's album "Stronger Than Death." He has also cohosted "Friday Night Rocks" on New York City's WAXQ radio station, and was featured as a guest on the talk program "That Metal Show." Piazza is himself a drummer, and has performed on stage with different groups. 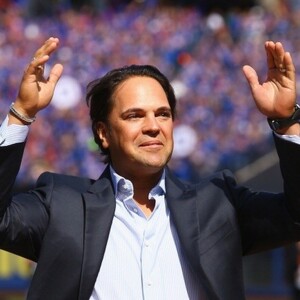