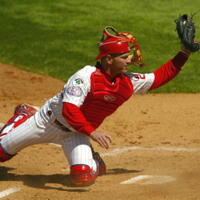 Mike Lieberthal Net Worth: Mike Lieberthal is a former American professional baseball player who has a net worth of $23 million. Born in Glendale, California, in 1972, Mike Lieberthal was drafted straight out of high school. The Philadelphia Phillies chose him with the third overall pick of the first round during the 1990 Major League Baseball draft. The right-handed catcher made his MLB debut on June 30, 1994 with the Phillies. He went on to play with the team for more than a decade before he signed a free agent contract with the Los Angeles Dodgers after the 2006 season. Lieberthal played with the Dodgers in 2007 before deciding to hang up the cleats after singing a one-day contract to retire as a member of the Phillies. Lieberthal finished his pro playing career with a .274 batting average to go along with 150 home runs and 610 runs batted in. He is a two-time MLB All-Star (1999, 2000) and won the Gold Glove Award in 1999. Three years later, Lieberthal was named the National League Comeback Player of the Year in 2002. During the summer of 2012, he was inducted into the Philadelphia Baseball Wall of Fame. Lieberthal had a brief movie role in the 2001 chick flick "Summer Catch" with a few of his teammates and other MLB players, including Ken Griffey Jr., Doug Glanville, and Hank Aaron. Lieberthal has been involved in several charitable efforts, including a charity billiards tournament for celebrities that raised hundreds of thousands of dollars to benefit the Philadelphia Futures program.