Miguel Cabrera Net Worth and Salary: Miguel Cabrera is a Venezuelan professional baseball player who has a net worth of $125 million. Also known affectionately by fans as "Miggy," Cabrera is a two-time American League MVP and an 11-time MLB All-Star. In 2012, he claimed the 17th MLB triple-crown. Primarily playing at first and third base, Cabrera began his MLB career in 2003 after joining the Florida Marlins. In 2007, he was traded to the Detroit Tigers and continued to play at an extremely high level. In 2013, he achieved a career-high batting average of .348.

Early Life: José Miguel Cabrera Torres was born on April 18th of 1983 in Maracay, Venezuela. After immigrating to the United States at a young age, he quickly became involved in baseball. At the young age of 16, he was drafted by the Florida Marlins as an amateur free agent.

Career: Miguel made his professional debut in 2000, playing in the Gulf Coast League. He was soon promoted to Class-A ball, steadily increasing his batting average with teams like the Blue Sox in the New York-Penn League. He also played in the Venezuelan Winter League during this period. He spent a number of additional leagues in the minor leagues, eventually settling in at third base and increasing his batting average to .365.

His major league debut came in 2003 for the Florida Marlins. Cabrera was 20 years old, and he was the second-youngest player to ever made his debut for the Marlins. He started well, hitting a walk-off home run during his first game. The game-winning homer helped Miguel instantly establish himself as a force to be reckoned with, and he helped Florida beat the New York Yankees to claim the World Series title.

He maintained a high batting average over the next few years, and by 2005 he had finished second in the National League in base hits and 30 home runs. In 2006, he represented Venezuela at the World Baseball Classic before he continued to play well for the Marlins. However, he was involved in a controversial altercation involving a slight scuffle with teammate Scott Olsen.

After signing a $7.4-million, one-year contract in 2007, Miguel participated in his fourth consecutive All-Star game. By the end of the year, he had been traded to the Detroit Tigers. He signed a lucrative, eight-year contract, which was the fourth-largest in baseball history. After a few games, Cabrera was relocated to first base. In 2009, he represented Venezuela at the World Classic and finished the season with a .324 batting average.

In 2010, he suffered an ankle injury during a game against the Cleveland Indians. In 2011, Miguel won his first career batting title with the AL batting title. In 2012, Cabrera went one step further by winning the Triple Crown. He had a batting average of .330, 44 home runs, and 139 RBIs. This was better than any other player in Major League Baseball. After winning his second MVP award in 2013, he signed a contract extension with the Tigers in 2014. Further titles and honors came over the next few years. In 2021, he became the second Tigers player to record 350 home runs and 2,000 hits.

Relationships: Miguel and his wife Rosangel have three children together. In 2017, it was reported that Rosangel had filed for divorce, but she eventually changed her mind and continued with the marriage.

Legal Issues: In 2009, police arrived at Cabrera's home in response to a domestic incident. He reportedly had a blood-alcohol level of 0.26 at the time, and he had suffered unexplained scratches across his face. Next year, Miguel spent three months in a treatment center in an effort to address alcohol abuse issues. In 2011, he was arrested for a DUI and resisting arrest in Florida.

According to her attorneys, she believes she is entitled to at least $100,000 per month, as this would allow her children to enjoy a similar standard of living to that of his "legitimate" children. Although Rodriguez didn't quite receive $100,000 per month, the court did agree to increase her child support payments to $20,000 per month.

Miguel Cabrera Salary and Career Earnings: In 2008, Miguel Cabrera signed an eight-year, $150-million contract, a deal that equated to an average annual salary of $21 million. He eventually signed a contract extension worth $248 million over the following eight years. Between June of 2017 and June of 2018, Miguel earned $30 million between salary and endorsements, making him one of the highest-paid athletes on the planet.

In total, Miguel Cabrera has earned more than $330 million in salary alone.

Real Estate: In 2016, it was reported that Cabrera had listed his home in Birmingham for $2 million. Considered a "modest mansion" by many observers, the home features a library, a movie theater, and a spacious backyard. In 2015, he purchased a $3.2-million property in Grosse Pointe Farms. This newer home spans 11,175 square feet, and it overlooks Lake St. Clair. It features six bedrooms, a solarium, and marble floors. The residence sits on 2.5 acres with a long driveway, gated entry, an eight-car garage, a swimming pool, and a putting green. 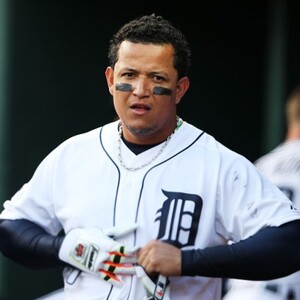