Michael Young Net Worth: Michael Young is an American retired professional baseball player who has a net worth of $40 million. Michael Young was born in Covina, California in October 1976. Young was an infielder who batted and threw right handed. He played for Bishop Amat Memorial High School and at the University of California, Santa Barabra.

He was drafted by the Baltimore Orioles in 1994 but returned to college. Young was again drafted in the 2007 MLB Draft by the Toronto Blue Jays. He played in the minor leagues until 2000 when he was traded to the Texas Rangers. Young made his major league debut in September 2000 for the Rangers where he played until 2012. He was traded to the Philadelphia Phillies where he played in 2013 before being traded again to the Los Angeles Dodgers. Young retired from major league baseball in January 2014. He was a seven time All-Star selection, five times at shortstop, once at third base, and another time as a combined designated hitter and utility infielder. Young was the American League batting champion in 2005. He was named MLB All-Star Game MVP in 2006 and won a Gold Glove Award in 2008. He won the Marvin Miller Man of the Year Award in 2008 and 2011. 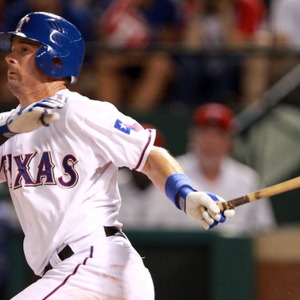