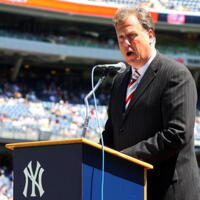 Michael Kay New Worth: Michael Kay is a play-by-play announcer and radio talk show host who has a net worth of $3 million dollars. Born February 2, 1961 in New York City, New York, Michael Kay is known as the play-by-play broadcaster for the New York Yankees, host of Centerstage on the YES Network and the host of The Michael Kay Show on WEPN-FM in New York City (simulcast on ESPN Xtra on XM Satellite Radio). A native of New York City (the Bronx) and nephew to actor Danny Aiello, Kay began reporting as a young man at the Bronx High School of Science and went on to report at Fordham University for WFUV where he earned a Bachelor of Arts in communications. Kay was awarded the Dick Young Award for Excellence in Sports Media by the New York Pro Baseball Scouts (1995) and was on was on the MSG Network team that won a New York Emmy for 'Outstanding Live Sports Coverage' (1998) as well as the MSG Network team that won New York Emmys for 'Outstanding Live Sports Coverage – Single Program' and 'The Battle for New York: Yankees vs. Mets' in 1996 & 1997, respectively. In 1998, Kay also began co-hosting 'Sports Talk with John Sterling and Michael Kay', a nightly sports radio call-in show which aired on WABC Radio during the winter months.