He worked his way through the organization's farm system until making his pro debut on September 23, 2001. Cuddyer went on to play with Minnesota for the next decade, until he landed a three-year, $31.5 million contract with the Colorado Rockies during the winter of 2011. As of the fall of 2014, he is currently with the Rockies organization. Cuddyer is a two-time MLB All-Star (2011, 2013) and won Silver Slugger honors in 2013, the same year he was the National League batting champion. Through the end of the 2014 season, Cuddyer has a career batting average of .279 to go along with 1,424 hits, 187 home runs, and 765 runs batted in. He has been married to his wife, Claudia Rente, since 2006. They have three children together, a son, and twin girls, born in 2008 and 2011. 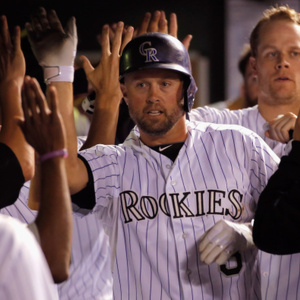