What is Max Scherzer's Net Worth and Salary?

Max Scherzer is an American professional baseball player who has a net worth of $120 million. During his career Max has played for the New York Mets, the Arizona Diamondbacks, Detroit Tigers, Washington Nationals, and Los Angeles Dodgers. In addition to being an eight-time MLB All-Star, three-time Cy Young Award winner, and pitcher of two no-hitters, Scherzer won the World Series with the Nationals in 2019.

In January 2016, Max signed a 7-year $210 million contract with the Washington Nationals.

On November 29, 2021 Max signed a record-contract with the New York Mets. The three year, $130 million deal gave Max the largest average annual total salary for any MLB player, at $43.3 million.

Max Scherzer was born on July 27, 1984 in Chesterfield, Missouri to Brad and Jan. He had a younger brother named Alex, who committed suicide in 2012. Scherzer grew up loving baseball, and was a fan of the St. Louis Cardinals. As a teen, he went to Parkway Central High School, where he played baseball, basketball, and football. The Cardinals' scouting director at the time, Marty Maier, was so impressed with Scherzer's playing that he selected him in the 43rd round of the 2003 MLB draft. However, Scherzer declined, and chose to attend the University of Missouri.

At Missouri, Scherzer honed his skills under the direction of coaches Tony Vitello and Tim Jamieson. In his sophomore year, he posted a 1.86 ERA and 131 strikeouts over 16 games. Later, in 2005, Scherzer won the Big 12 Pitcher of the Year Award.

In the 2006 MLB draft, Scherzer was selected in the first round with the 11th overall pick by the Arizona Diamondbacks. He began playing in the organization the following year with the Single-A Visalia Oaks, and was shortly after promoted to the Double-A Mobile BayBears. Following his strong start with the Triple-A Tucson in 2008, he was finally called to the Diamondbacks. Scherzer made his MLB debut with the team in April of 2008 in a game against the Houston Astros; immediately proving his ability, he threw 4 ⅓ perfect innings and posted seven strikeouts. In 2009, Scherzer became a full-time starter, and notched his first MLB victory with a 12-0 win over the Atlanta Braves.

Scherzer was traded to the Detroit Tigers in December of 2009. With the team, he gradually grew into a top player, and became part of a powerful starting duo with fellow right-hander Justin Verlander. Following strong seasons in 2010 and 2011, he had his best year yet in 2012 when he surpassed the 200-strikeout mark and recorded his personal best winning percentage. The Tigers went on to win the AL Central division, and then to face off against the San Francisco Giants in the World Series, which the Giants ultimately won. Scherzer had an even stronger season in 2013, becoming the first Tigers pitcher ever to begin a season 12-0. Moreover, he recorded his 1,000th career strikeout, and finished the regular season with an incredible 21-3 win record. In recognition of his achievements, Scherzer won his first Cy Young Award. He continued his success in the ALDS and then in the ALCS, although eventual World Series champion the Boston Red Sox ultimately won the latter. Scherzer had another historic season with the Tigers in 2014, when he recorded his first shutout in a 4-0 win over the Chicago White Sox. He finished the season with a 3.19 ERA, as well as a career-best strikeout total of 252.

In January of 2015, Scherzer signed a seven-year, $210 million contract with the Washington Nationals, one of the largest in sports history at that time. His first season with the team was historic, as he became only the sixth pitcher ever in the MLB to record multiple no-hitters in a single season. In May of 2016, he tied the major league single-game strikeout record with 20. As a result, Scherzer won the NL Cy Young Award, a feat he repeated in 2017. The next season, he recorded 300 strikeouts, and threw more pitches than any other MLB pitcher, with 3,493.

The 2019 season was another historic one for Scherzer, as he recorded his 2,500th career strikeout and was named to his seventh consecutive All-Star Game. Moreover, the Nationals beat the Milwaukee Brewers in the NL Wild Card Game, advancing to the NLDS where they emerged victorious over the Dodgers. In the subsequent NLCS, Scherzer and the Nationals took down the St. Louis Cardinals, and advanced to the World Series against the Houston Astros. With the Series tied 3-3, Scherzer started the decisive Game 7, giving up two runs over five innings. Eventually, the Nationals came back to win the World Series, their first in franchise history.

Scherzer was traded to the Los Angeles Dodgers in July of 2021. That September, he became the 19th pitcher to reach 3,000 strikeouts, and had a perfect game against the San Diego Padres for eight innings. Scherzer finished the season with a 15-4 record, and advanced with the Dodgers to the NLDS. After defeating the San Francisco Giants, they proceeded to the NLCS, where they fell to the eventual World Series champ the Atlanta Braves.

In December of 2021, Scherzer signed a three-year, $130 million contract with the New York Mets. The average annual value of the contract, $43.3 million, is the largest in MLB history.

While at the University of Missouri, Scherzer met Erica May, who was a pitcher on the Mizzou softball team. The two dated for over eight years, and got married in 2013. Together, they have two daughters named Brooklyn and Kacey and a son named Derek. The family lives in the McLean community in Northern Virginia; Scherzer also has a home in Jupiter, Florida.

Due to heterochromia iridum, Scherzer's eyes are two different colors: his right is blue while his left is brown. 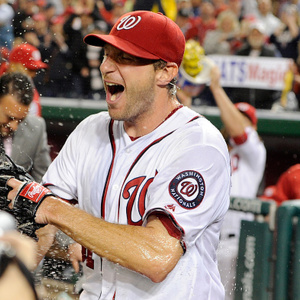