Matt Kemp net worth and salary: Matt Kemp is an American professional baseball player who has a net worth of $70 million. Matt Kemp's salary per year is $20 million. Kemp made his professional debut in 2007 at the age of 22. He currently plays for the Atlanta Braves. Matt Kemp grew up with his brother Carlton in Midwest City, Oklahoma. They were raised by their parents Carl Kemp and Judy Henderson. His father was a manager at an electric company while his mother was a nurse. Matt's sports talent was obvious throughout his teenage years and he played a major role in winning the Oklahoma state high school basketball championship for Midwest City High School. Later, he started inclining more towards baseball than basketball and was selected by the Los Angeles Dodgers in the sixth round of the 2003 draft finally making his major league debut for the team in 2006.

At one point around November 2009, Kemp briefly dated pop singer Rihanna. He is involved in many charities for children, and has created a community initiative called "Kemp kids". The initiative brings together children from the Los Angeles area and nearby areas just to have a good time. The project started in 2008 and 2009 where he sponsored children to watch several games at Dodger Stadium. Matt Kemp's exploits on the field have not gone unnoticed and he has received impressive awards such as National League Gold Glove award which he won in 2009. Matt began playing for the San Diego Padres in 2015 and joined the Atlanta Braves in 2016. In 2018 he started playing for the Dodgers. As of September 2018, Matt Kemp has earned $150 million in MLB salary alone. That's enough to make him one of the 40 highest-earning baseball players of all time. 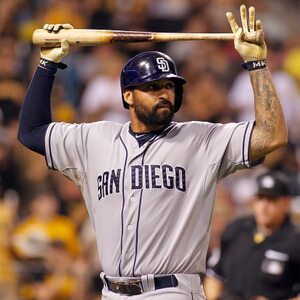