How much is Matt Holliday Worth?

Matt Holliday net worth and salary: Matt Holliday is an American baseball player who has a net worth of $60 million dollars. Matt Holliday was born in January of 1980 and serves as a left fielder for the St. Louis Cardinals in Major League Baseball. He was first drafted in 1998 by the Colorado Rockies, in the seventh round of the draft. At the time, he was a senior at Stillwater High School in Stillwater, Oklahoma. Then, after years of minor league play, he made it to the major league in 2004. However, he was traded to the Oakland Athletics for the 2009 baseball season. Once becoming a free agent, Holliday signed again with the Cardinals, with whom he currently has a contract until 2017. To date, Holliday is listed as having won a number of awards, including six All-Star and four Silver Slugger awards. In 2007 he was the runner-up for the National League MVP. That season he also came in at number one for the National League's batting average, RBIs (runs batted in), as well as hits and double-base hits. He also won the MVP for 2007's National League Championship, a feat that helped the Rockies earn their first pennant in the World Series.

Matt Holliday Salary
What is Matt Holliday's salary? $17 million per year as part of a 7 year $120 million contract with the St. Louis Cardinals. 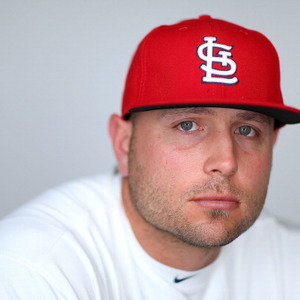