Matt Harrison Net Worth: Matt Harrison is an American professional baseball player who has a net worth of $35 million. Born in Durham, North Carolina in 1985, Matt Harrison was drafted during the third round of the 2003 MLB Draft by the Atlanta Braves before he had a chance to play college baseball near his home at North Carolina State University.

He made his professional debut on July 8, 2008 for the Texas Rangers. As of the fall of 2014, Harrison has played ever game of his MLB career with the Rangers. Through May 13, 2014, he has amassed a career 49-33 win-loss record, a 4.15 earned run average, and 403 strikeouts. He earned All-star honors during the 2012 season. The left-handed batter and pitcher wears number 54 with the Rangers. He underwent lumbar spinal disc fusion surgery on June 3, 2014, which ended his season and has the potential to end his MLB career. Harrison is best known for his sinkerball, but also utilizes a four-steam fastball, a curveball, a changeup, and a cutter. He has been married to his wife, Meghan, since 2008, after they were high school sweethearts. Meghan gave birth to the couple's first child, a daughter named Addie Grace, in late 2011. 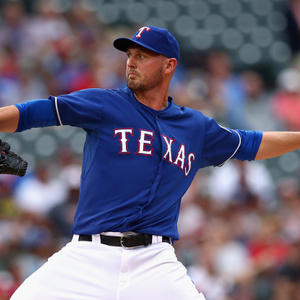