Mark Trumbo net worth: Mark Trumbo is an American professional baseball player who has a net worth of $12 million. Mark Trumbo was born in Anaheim, California in January 1986. He is a first baseman and outfielder who bats and throws right handed. Trumbo was an All-American at Villa Park High School and was drafted in the 18th round of the 2004 Major League Baseball Draft by the Anaheim Angels.

He didn't make his MLB debut until 2010 and played with the Angels until 2013. Trumbo played for the Arizona Diamondbacks from 2014 to 2015, the Seattle Mariners in 2015, and for the Baltimore Orioles since 2016. He is a two time All-Star, and won the Silver Slugger Award and was the MLB home run leader in 2016. Through the 2016 season he had 796 hits and 178 home runs with 517 runs batted in. Trumbo signed a three year deal with the Orioles in 2017 after also being winning the AL Sporting News Comeback Player of the Year Award in 2016. 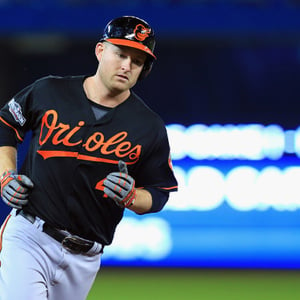