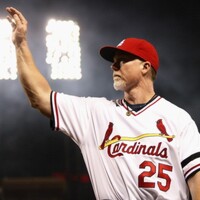 What is Mark McGwire's Net Worth and Salary?

Mark McGwire is a retired American professional baseball player who has a net worth of $60 million. Starting his career in 1986, Mark McGwire played for the Oakland Athletics and the St. Louis Cardinals before retiring in 2001. During this period, he won the World Series with the Athletics. He then returned to the MLB as a coach, winning the World Series for a second time with the Cardinals.

During his time as a professional, Mark established an incredible reputation as a home run hitter. He holds the record for at-bats per home run ratio, with a ratio of 10.6. He also held the record for home runs in a single season and home runs hit by a rookie, although both of these records have since been broken. Experts state that if McGwire hadn't struggled with such considerable injuries, his achievements would have been even greater.

Also known as "Big Mac," Mark stood at 6'5 and weighed about 245 pounds during his playing career. In 2010, McGwire's reputation was irrevocably sullied after he became embroiled in the famous steroids scandal that engulfed Major League Baseball. That year, he publicly admitted to using performance-enhancing drugs throughout much of his career. This means that although Mark has achieved incredible things in the world of baseball, there will always be an "asterisk" next to his name that highlights his steroid usage. Due to this scandal, he has not been elected into the National Baseball Hall of Fame.


When his storied baseball career ended in 2001, Mark had earned $74 million in salary. He also earned tens of millions from endorsements during his time as a professional athlete.

Mark David McGwire was born on October 1st of 1963 in Pomona, California. During his high school years in La Verne, he played baseball, golf, and basketball. After graduating, he was drafted as an amateur by the Montreal Expos, but he declined to sign a contract with the team. Instead, he played college baseball at the University of Southern California, joining teammates Randy Johnson and Jack Del Rio. The team was coached by Rod Dedeaux. During this period, he also joined the 1984 US Olympic team, finishing with a silver medal after losing to Japan.

In 1984, McGwire was drafted by the Oakland Athletics. Two years later, he debuted in the major league and recorded three home runs in 18 games. In 1987, Mark first started to gain recognition as a rookie. By the end of the season, he had hit 49 home runs, a record that would stand until Aaron Judge shattered it with 52 rookie home runs in 2017. Mark's strong performance that season won him a place in the All-Star team.

Over the next few seasons, McGwire continued to hit more than 30 home runs per season. This included a game-winning home run against the Los Angeles Dodgers during Game 3 of the 1988 World Series. Unfortunately, his performance dropped significantly over the next few years, and during the early 90s Mark's batting average was dropping to below .200. He later claimed that 1991 was his worst-ever season.

After working on his physical fitness, McGwire returned in 1992 with much better form. Over the next few years, he would hit an astonishing number of home runs per season. In 1996, he hit 52 home runs. This left him with 363 home runs with the Athletics.

In 1997, Mark was traded to the St. Louis Cardinals. In 1998, he broke the single-season home run record with 70 home runs. This record was eventually broken by Barry Bonds in 2001, who finished with 73 home runs. By 2001, injuries had taken their toll on McGwire, and he retired that year. 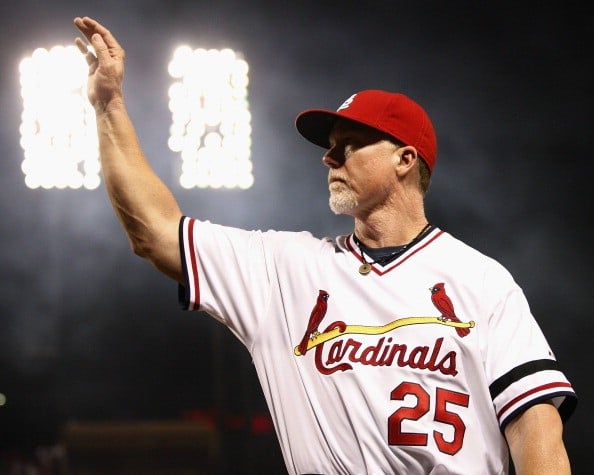 McGwire began his coaching career as a hitting coach for the Cardinals, although he later switched to the Los Angeles Dodgers in order to be closer to his family. He eventually ended his coaching career with the San Diego Padres, leaving the team in 2018.

McGwire admitted to using steroids as early as 1998, when he stated that he had been taking androstenedione. At this point in time, androstenedione was not banned by the MLB, although it was banned by the World Anti-Doping Agency, the NFL, and the IOC. In 2005, Jose Canseco wrote about injecting steroids alongside McGwire in his book "Juiced: Wild Times, Rampant 'Roids, Smash Hits & How Baseball Got Big." That year, McGwire joined Canseco and several other baseball players to testify at a congressional hearing on the use of steroids. He refused to answer questions while under oath, stating that his lawyer had advised him to remain silent.

In 2010, Mark finally admitted to using steroids intermittently during his playing career over a period of ten years. He also stated that he regretted his decision, calling it a "foolish mistake." McGwire also stressed that he mostly used steroids to recover from his various injuries.

In 1999, it was reported that entertainment entrepreneur and comic book creator Todd McFarlane had purchased McGwire's 70th homerun baseball for $3 million. The piece of sports memorabilia was at one point referred to as the "crown jewel of sports collectibles." Many years later, an expert stated that the famous McGwire ball was probably only worth between $250,000 and $400,000. This rapid decrease in value reflects the decline of McGwire's popularity over the years, especially when you consider his steroid-use scandal.