How much is Mark Loretta Worth?

Mark Loretta Net Worth: Mark Loretta is a former American professional baseball player who has a net worth of $13 million. Mark Loretta was born in Santa Monica, California, in 1971. He played college baseball at Northwestern University in the suburbs of Chicago before the Milwaukee Brewers chose him during the seventh round of the 1993 Major League Baseball draft. Loretta made his pro debut about two years later on September 4, 1995 with the Brewers. The right-handed infielder played in Wisconsin until 2002 when he joined the Houston Astros. Loretta played with the San Diego Padres from 2003 until 2005, the Boston Red Sox in 2006, the Astros a second time from 2007 until 2008, and, lastly, the Los Angeles Dodgers in 2009 before announcing his retirement. Following the end of his playing days, he worked as an assistant to the Padres' baseball operations department. Loretta last played in an MLB game on October 4, 2009. He is a two-time MLB All-Star (2004, 2006) and won the Silver Slugger Award in 2004. In 2012, he coached Israel's national baseball team in the World Baseball Classic qualifier for 2013, though the team failed to get into the tournament. Loretta and his wife, Hilary, have two children together: a daughter named Lucy and a son named Frankie. 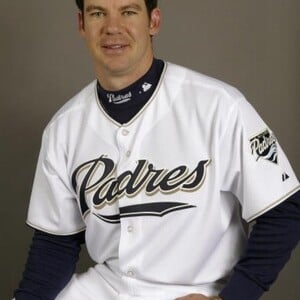