Mark Kotsay Net Worth: Mark Kotsay is a former American professional baseball player who has a net worth of $22 million. Born in 1975 in Whittier, California, Mark Kotsay played college baseball at Cal State Fullerton where he earned All-American honors and was named the Most Outstanding Player in the College World Series in 1995. Kotsay also won the Golden Spikes Award the same year. The Florida Marlins drafted him with the ninth pick of the 1996 MLB Draft and he made his pro playing debut on July 11, 1997. He played with the Marlins until 2000 before joining the San Diego Padres from 2001 until 2003. Kotsay later played with the Oakland Athletics from 2004 until 2007, the Atlanta Braves in 2008, the Boston Red Sox from 2008 until 2009, the Chicago White Sox from 2009 until 2010, the Milwaukee Brewers in 2011, and, lastly, the Padres a second time from 2012 until 2013. Kotsay, a left-handed outfielder, last played on September 29, 2013 with the Padres. He finished his career with a .276 batting average to go along with 127 home runs and 720 runs batted in. Kotsay competed internationally for the U.S. men's national team, helping secure a bronze medal at the 1996 Summer Olympics in Atlanta. In 2014, Kotsay took a job working in the front office for the Padres. He has three children with his wife, Jamie. 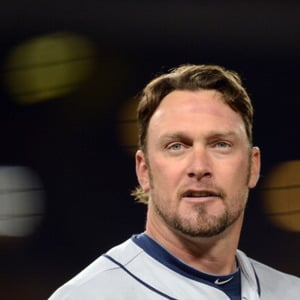