Mark Ellis Net Worth: Mark Ellis is an American professional baseball player who has a net worth of $18 million. Born in Rapid City, South Dakota, in 1977, Mark Ellis played college baseball for the University of Florida Gators, where, at one point, he was named MVP of a regional as part of the College World Series.

The Kansas City Royals drafted him during the ninth round of the 1999 Major League Baseball draft and he made his professional debut on April 9, 2002 after he was traded to the Oakland Athletics. He played with the A's for close to a decade before he joined the Colorado Rockies in 2011. Ellis went on to play for the Los Angeles Dodgers from 2012 until 2013 and the St. Louis Cardinals in 2014. As of the conclusion of the 2014 season, the right-handed second baseman is currently a free agent. Through that season, he has amassed a career batting average of .262 with 105 home runs and 550 runs batted in. Ellis hit for the cycle on June 4, 2007 (recording a single, a double, a triple, and a home run in the same game) while with the Oakland A's. He is a two-time Catfish Hunter Award recipient (2005 and 2007). Ellis appears in the 2011 movie "Moneyball" and is played by Brent Dohling. 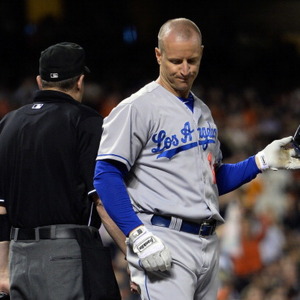